Course of the HIV-infection

The untreated HIV-infection proceeds in different phases. However, the course of infection may vary according to different persons.

During the first phase of the infection, the virus is multiplying itself very fast. The CD4 lymphocytes may decrease, but stabilise again later. The immune system begins to produce antibodies against the virus in this first phase following the infection. Often, some weeks after the virus has accessed the body, flu-like symptoms such as fever, malaise, headache, swelling of the lymph nodes and skin rashes occur.

In the following course, more and more lymphocytes are destroyed. Nevertheless, many patients feel well and do not recognize the infection, although they might be already infected for a long time. This phase lasts normally a couple of years. Some general symptoms may occur, i. e. malaise, swelling of the lymph nodes or changes in the blood count.

In the course of the loss of lymphocytes, the body is not able to defend itself sufficiently against infections by other agents. Symptoms such as oral and genital trush, fever, diarrhoea or shingles occur.

AIDS is the abbreviation for “Acquired Immune Deficiency Syndrome”. If the immune system is heavily compromised, life-threatening diseases will arise. Certain diseases have been defined which are considered as AIDS-defining-diseases.

Course of the HIV-infection with treatment

Course of the HIV-infection with treatment (German) 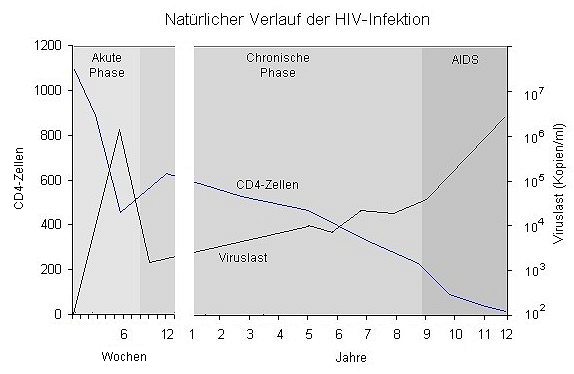 Course of the HIV-infection with treatment (German) 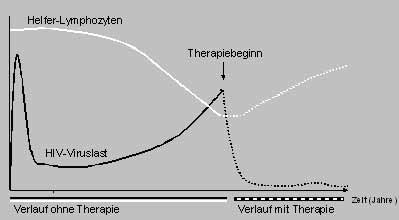